Here's few pics from a fishing trip a couple days ago.  This lake is the highest I've ever seen it.  Our record rainfall here in May still has all our lakes full or over.  This first shot is the put it spot and the island in the background is where I would walk and fish before all the rain. 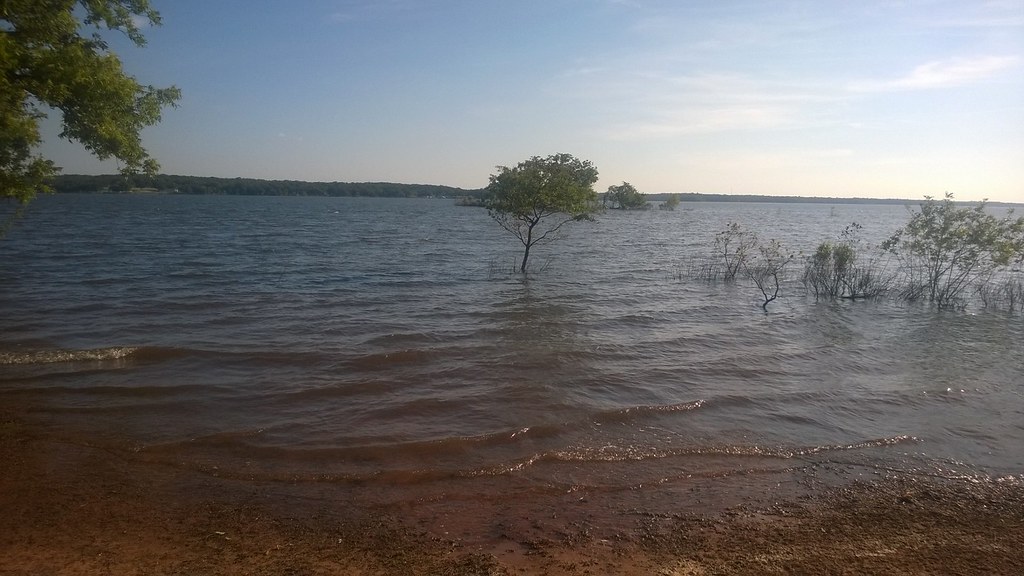 We were set out to mainly fish for catfish and then also be casting for crappie, bass, saugeye.

Here's canoe shot, the BIL is in front 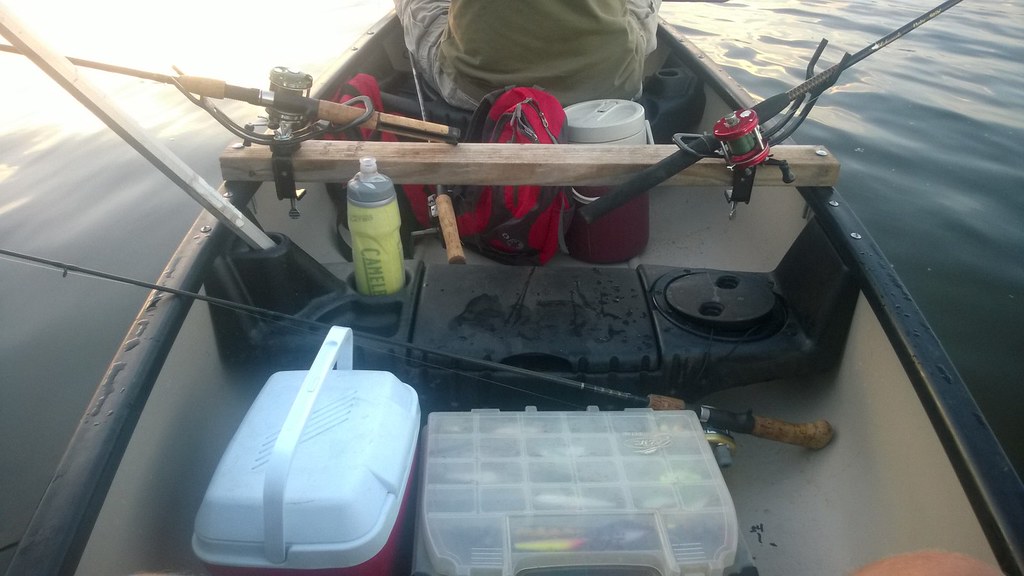 those rod holders are pretty crappy.  They were dirt cheap and they are proving it.  While they did work I am planning to get some better holders like those driftmaster holders or something similar.  The little board though worked well for having a steady platform to mount the holders to.

While fishing around a marina and closed boatramp these ducks came by to amuse us.  They were used to being fed.  They swam right up to us and were chasing our lures when we would cast.  It was pretty amusing as the baby ducks were literally running on water chasing them. 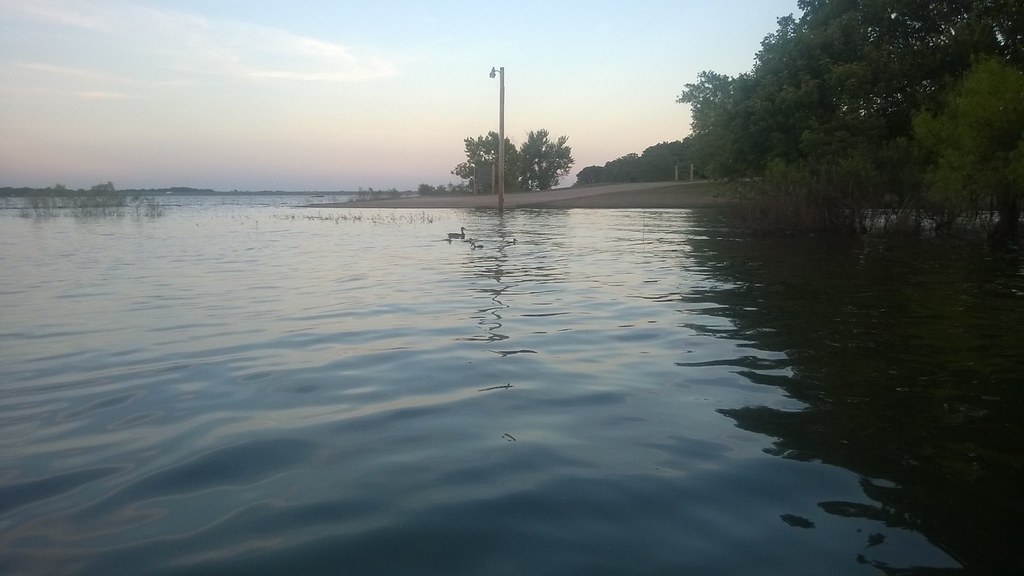 The sunset was enjoyable as it usually is from the water 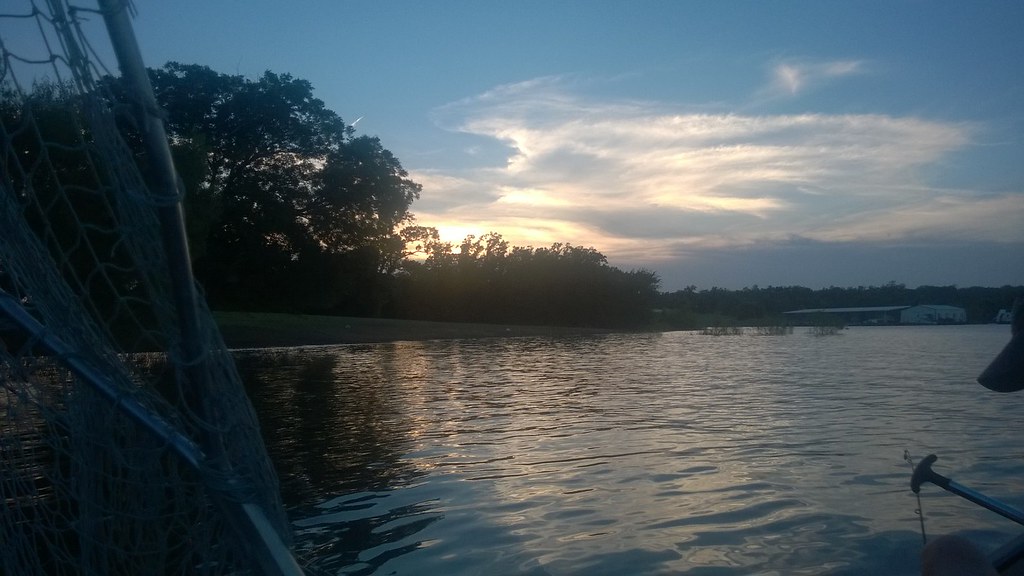 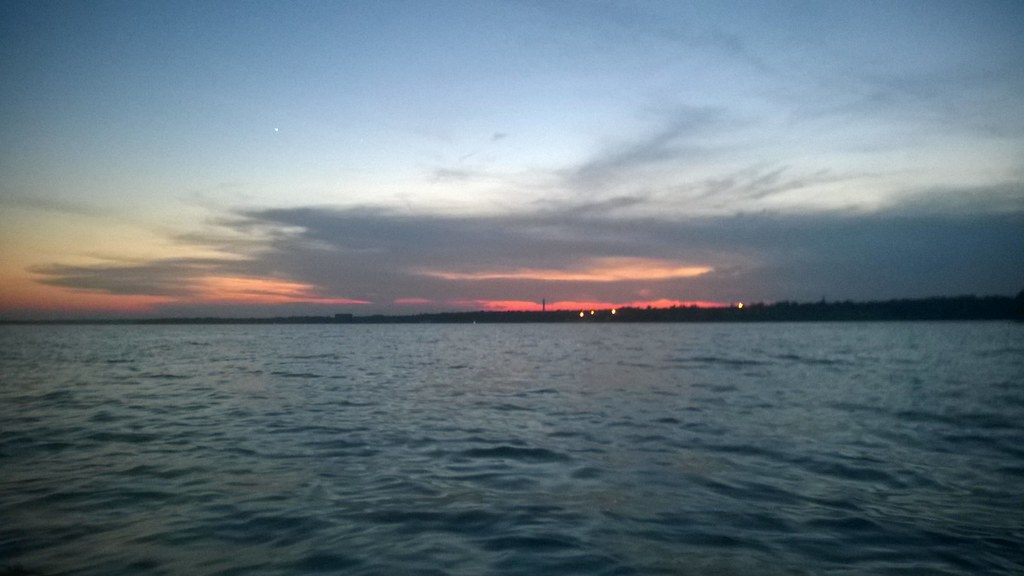 Well we caught some sandbass for a bit and once darkness fell the wind died down and we set out for the deeper water.  I don't know if it was the water being high or what but we didn't get into catfish at all.  I couldn't believe it as I always get into them here.  Only fish we caught picture worthy was this massive sheepshead.  We think it was around 15lbs or so, it's one of the biggest freshwater fish I've ever caught.  It was fun to catch but disappointing as I was expecting it to be a catfish.  The girth on this fish was impressive.  It's been eating good to say the least. 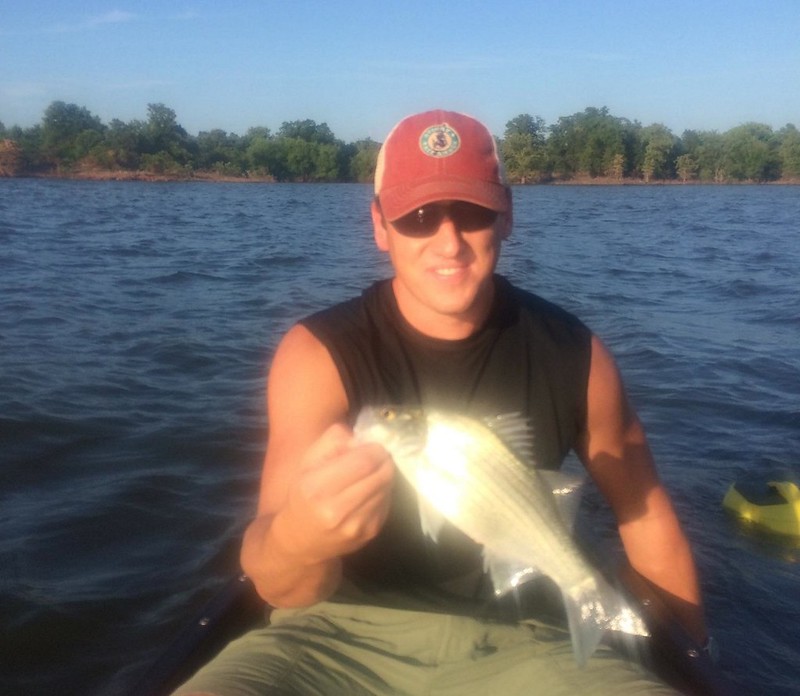 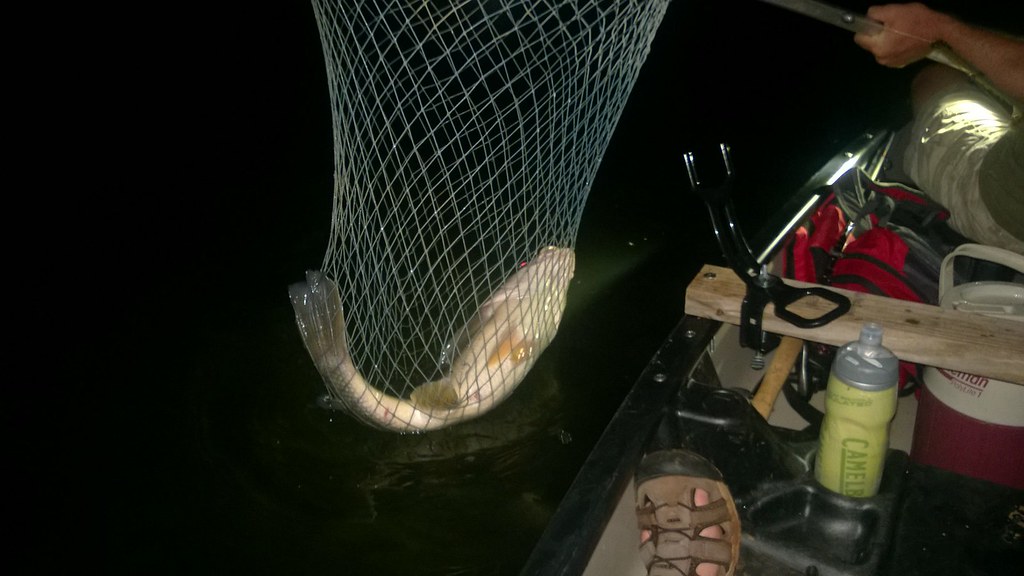 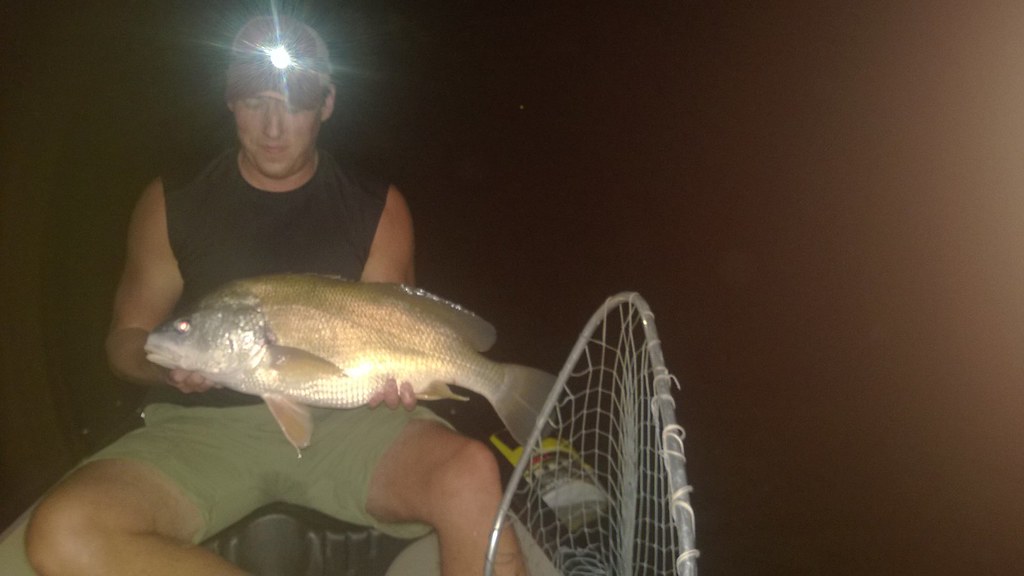 It was a slow night and we called it about midnight.  Still a good trip even though we didn't get our mess of catfish we were hoping for.  Just gives me more reason to get back out again soon.

thanks for looking
Posted by OutdoorEnvy at 12:16 PM 2 comments:

Well I got out for a brief jaunt mostly to get a feel for a new pack and use my new knife some.  It was a hot and humid day.   I stuck mostly to a couple trails/roads that are blocked off from public access.  I hunt this area in the fall so it was a good opportunity to scout some of the area I haven't been before.

So here we are getting going.  I found a hidden away pond down the trail some.  Might be a good spot for ducks in a few months. 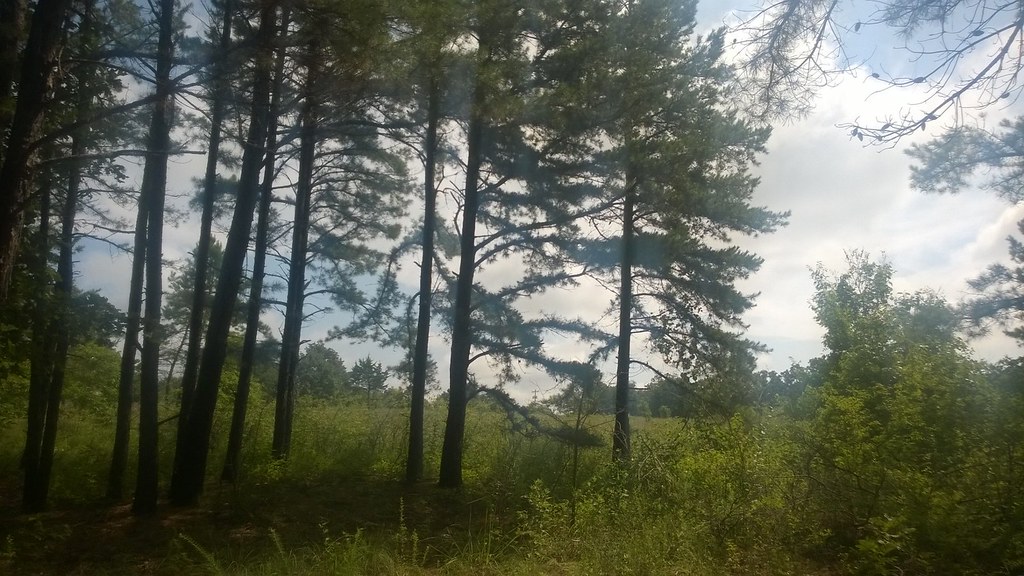 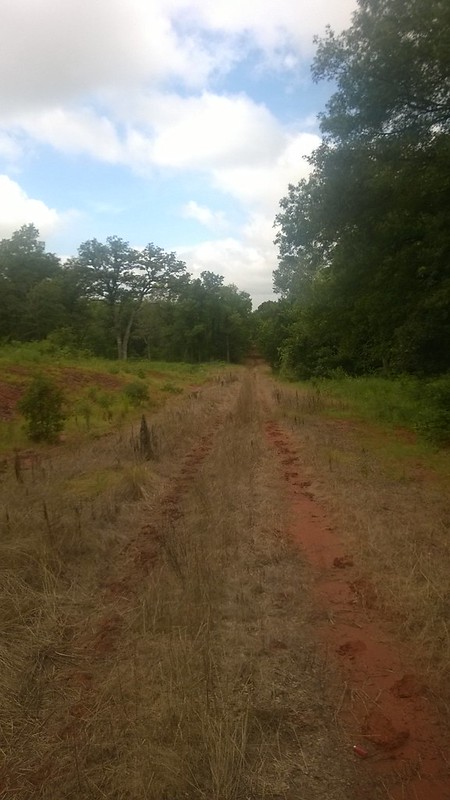 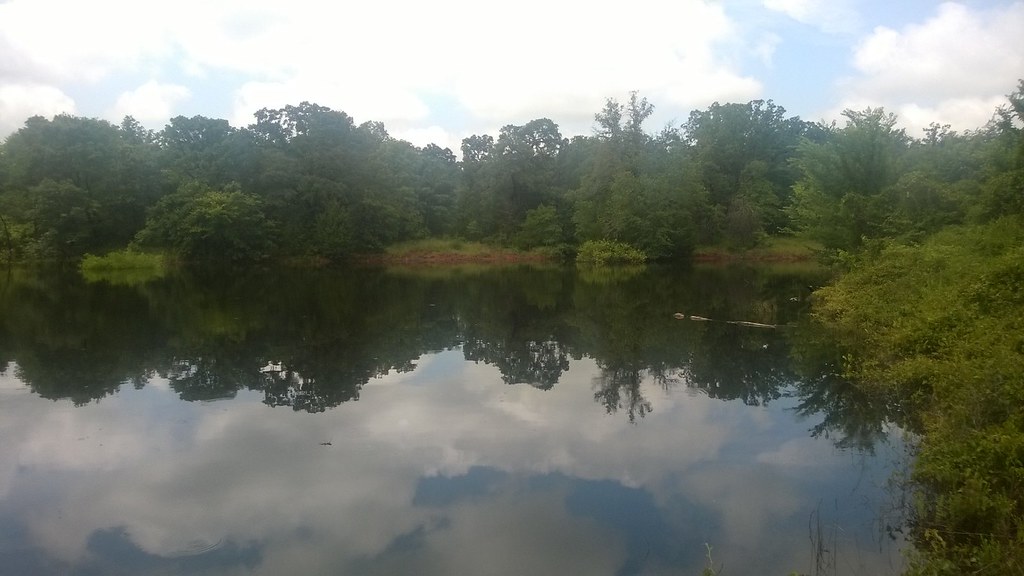 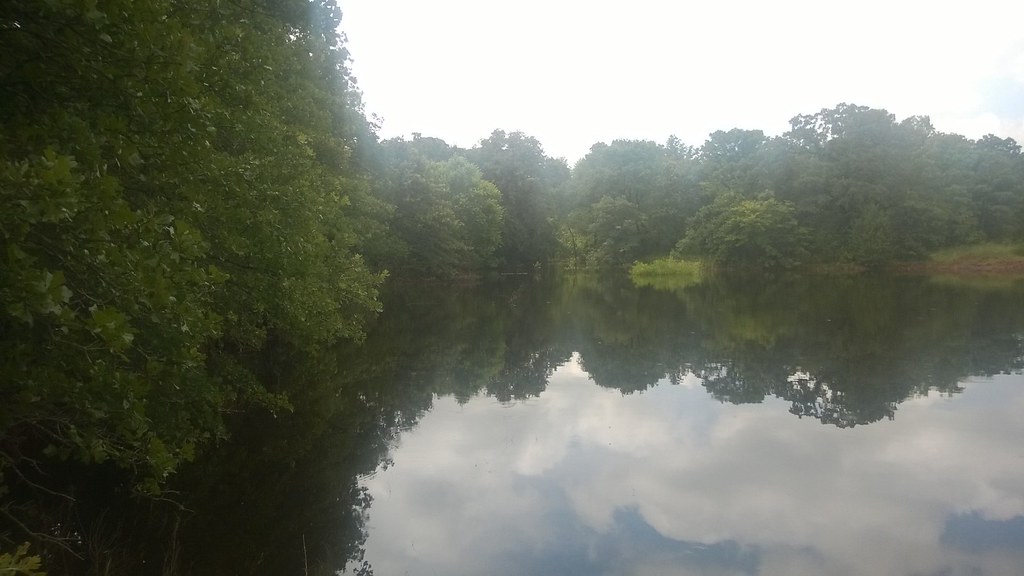 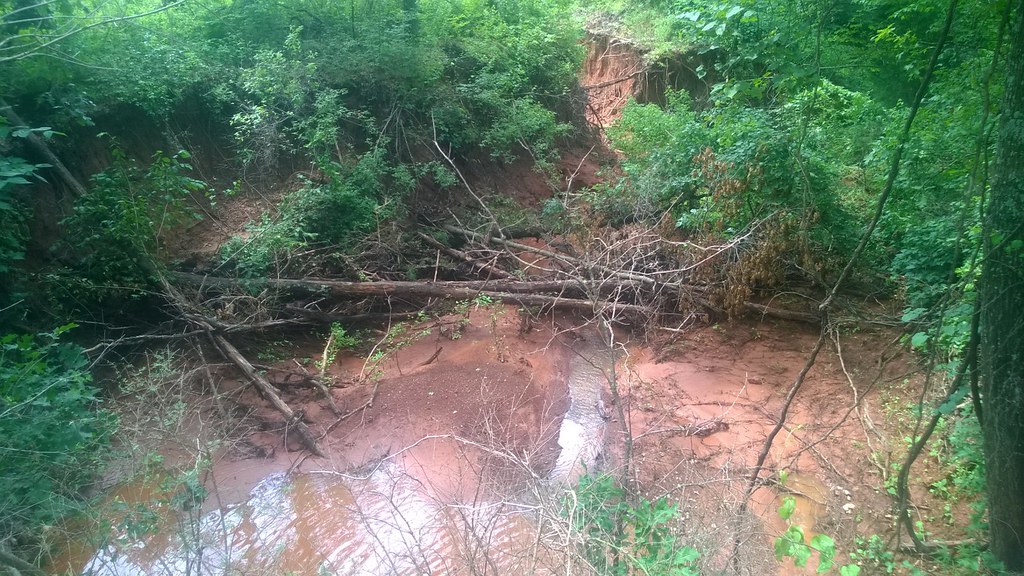 The pack I was trying out is a High Sierra Explorer 55.  I loaded this with 30lbs of gear to get a feel for it 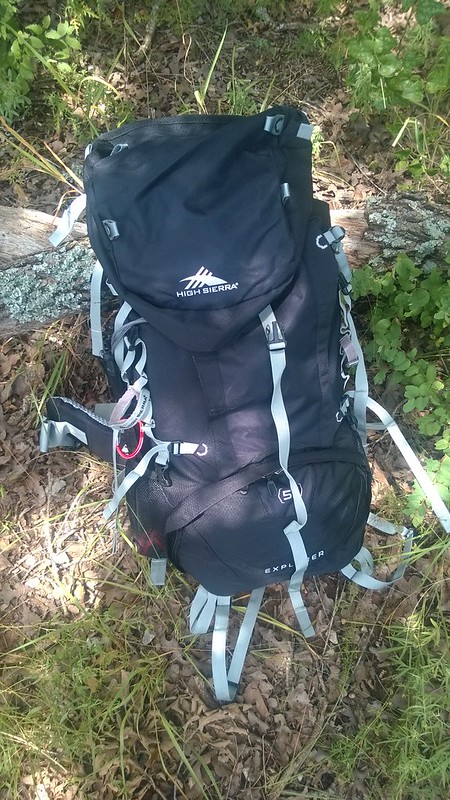 You could really pile on the gear with this pack, the top has tie downs, and the bottom has lashing straps as well.  I'll do a post at sometime on the pack in more detail 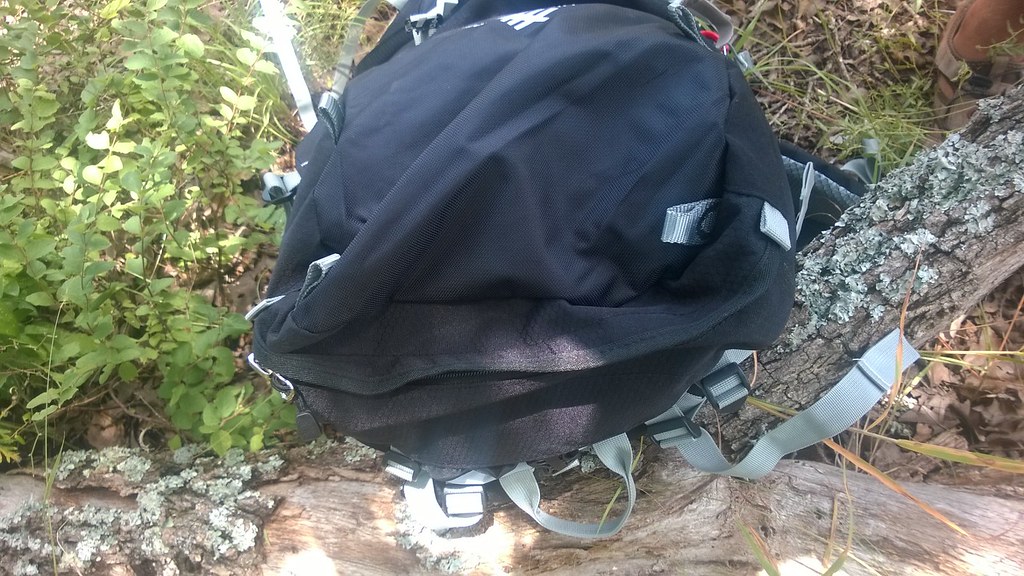 This pack also has an easily adjustable fit for the shoulder straps to get the torso length right for you.  Also here is the SOG Fieldpup sheath that I used for the Redneck Woodlore knife.  It attached easy to the waisbelt on the pack.  I realized now where dangler sheaths have their place.  I usually don't like danglers so I don't have one but with the waistbelt for the pack it wasn't working with a regular belt ride sheath.  This did fine for this trip. 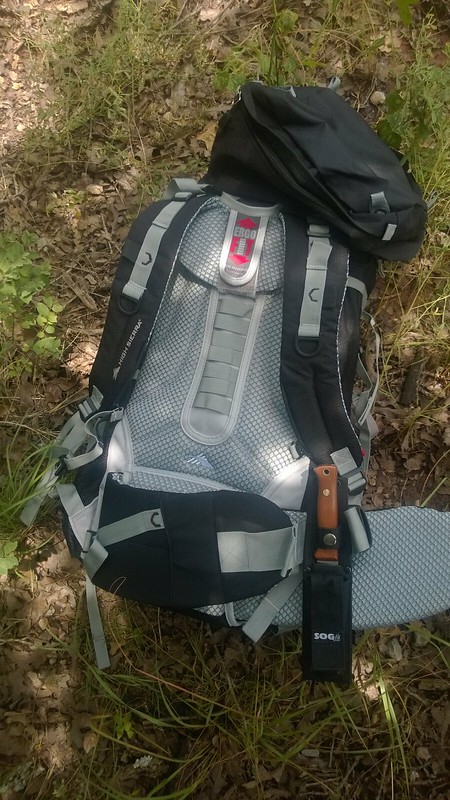 I also had the Sven Saw a long for this trip.  It was about 90 degrees and almost 100% humidity.  The kiddos still wanted a little hot chocolate.  I thought I'd amuse them and get to use my knife in the process 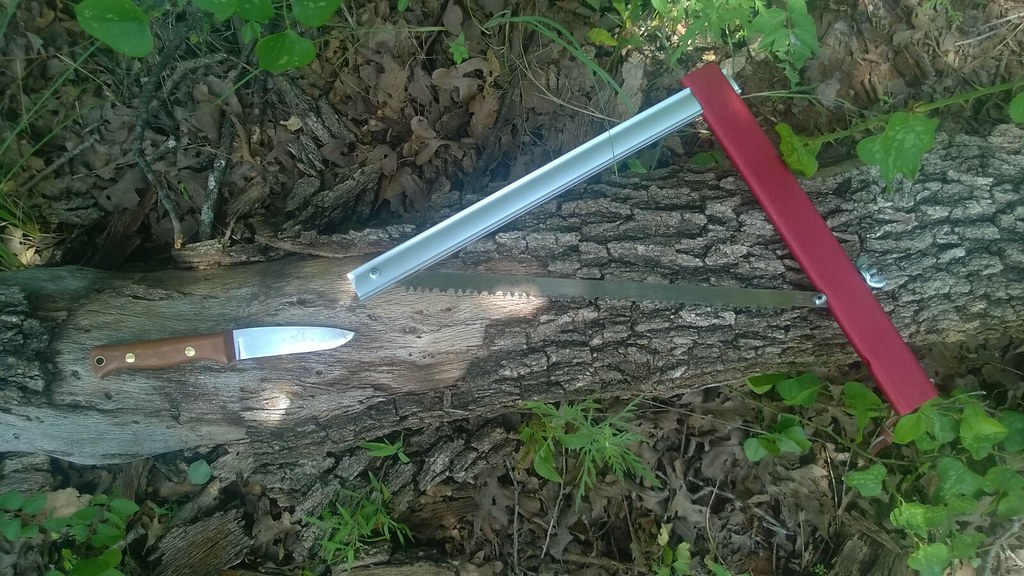 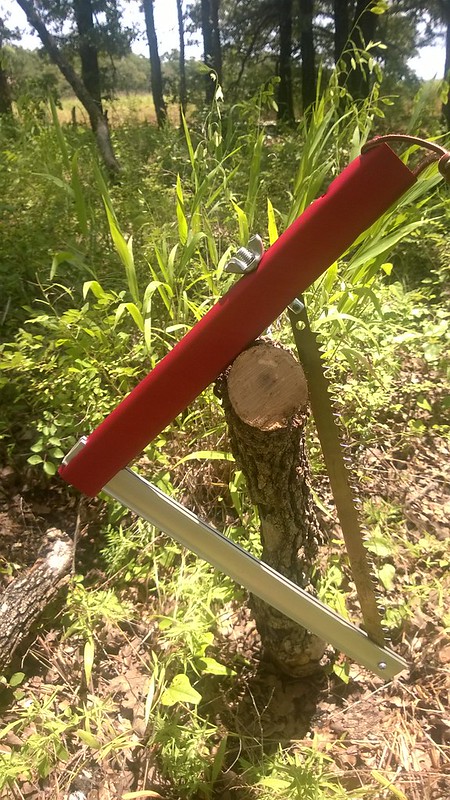 I have used this knife around the house and on some carving projects but this was the first official woods trip with it.  It is a woodlore style made by Redneck knives.  Natural Micarta scales with red liners.  You probably noticed right off the bat it's a convex grind and not a scandi.  I just prefer that grind as I am better with it.  So far I am really liking this knife a lot.

Time to start processing some wood... 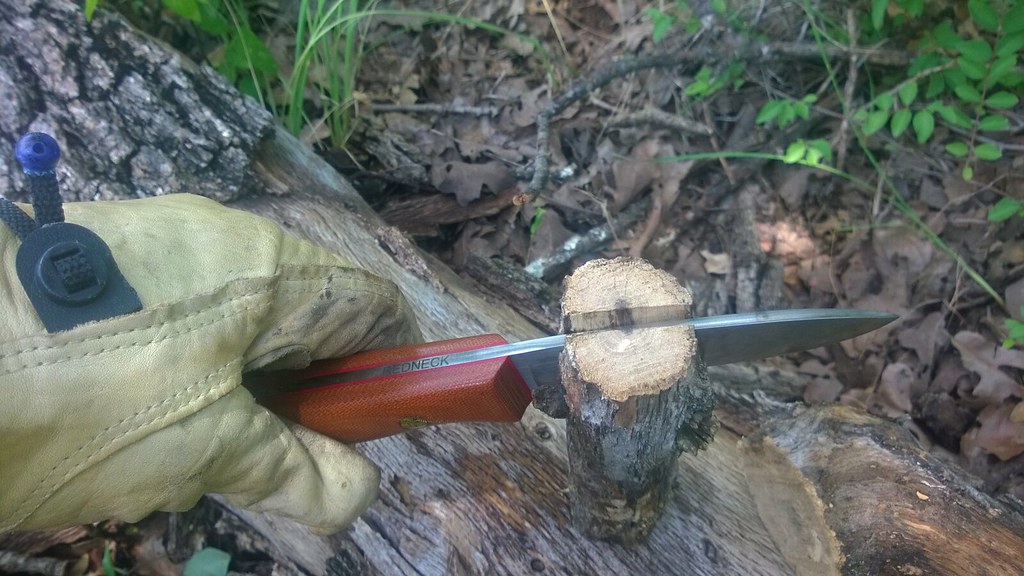 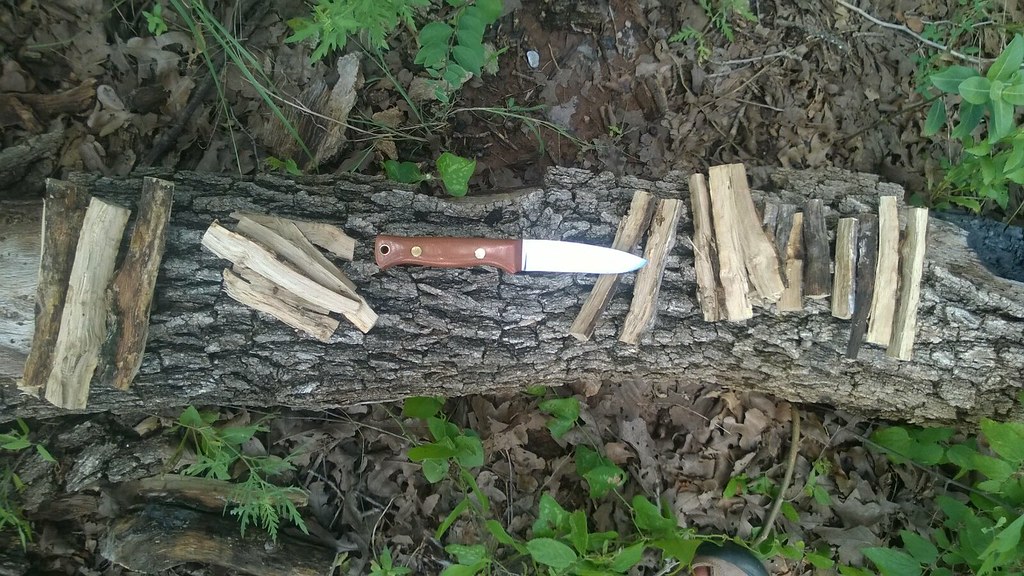 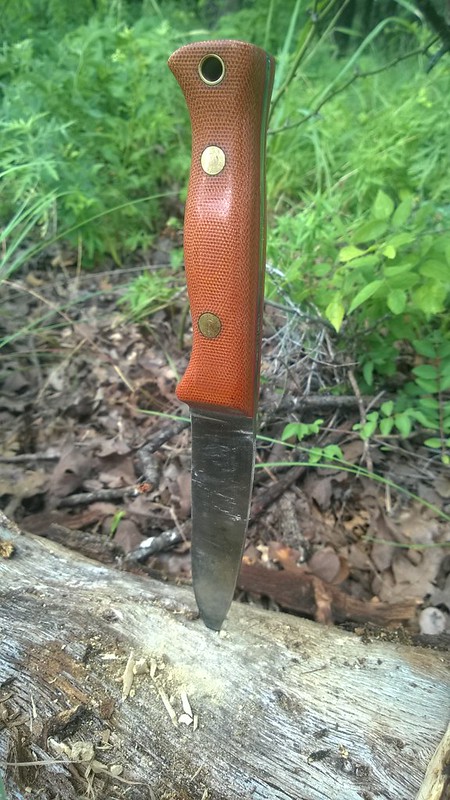 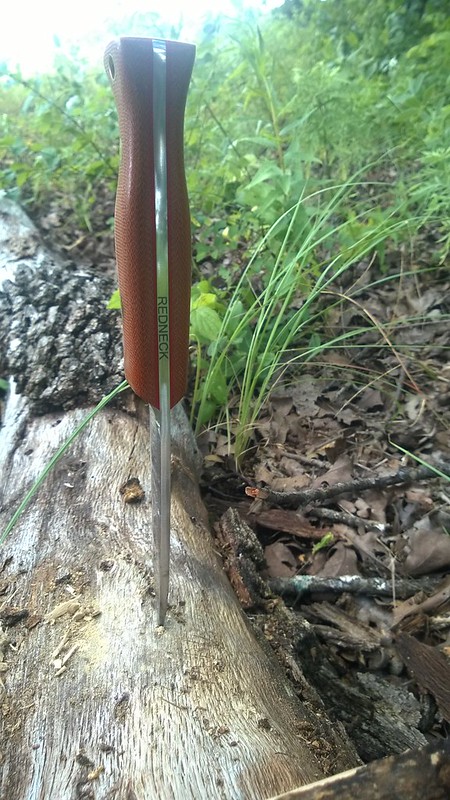 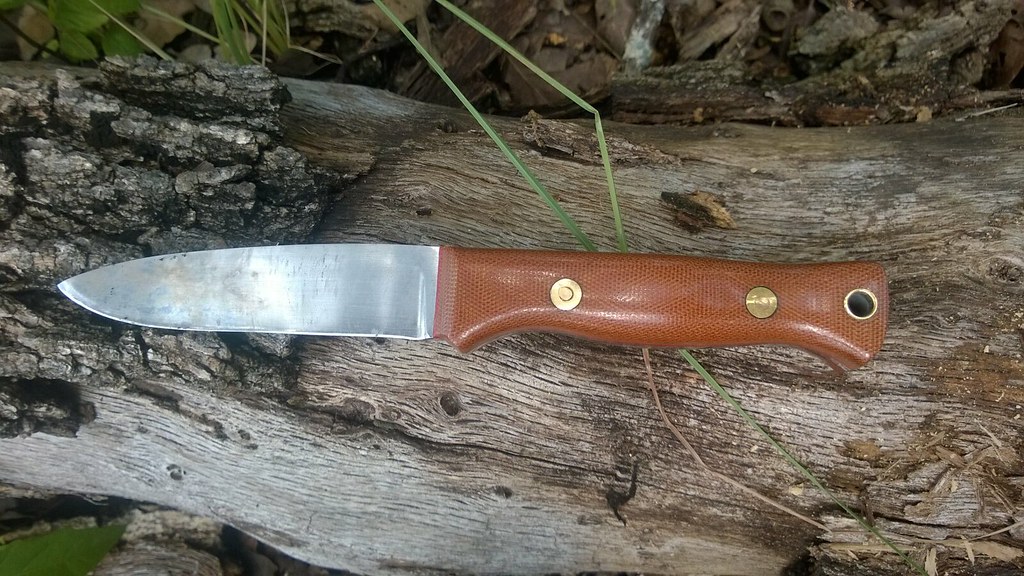 Well we got the pot going and got the kids their hot chocolate and then we called it a day.  We probably did 3 miles of hiking.  The pack was very comfortable.  I was actually pretty surprised on how well that 30lbs was carrying.  The load balanced well and never bothered me a bit.  It was hot so I was sweating but the pack does keep the pack off your back so I did feel the breeze on my back.  Only warm spot was around the waistbelt in the back.  But when it's as hot as it was with humidity it won't matter what you are wearing.

so all in all a good trip out.  The gear was as I hoped it would be and leaves me looking forward to a longer trip out. 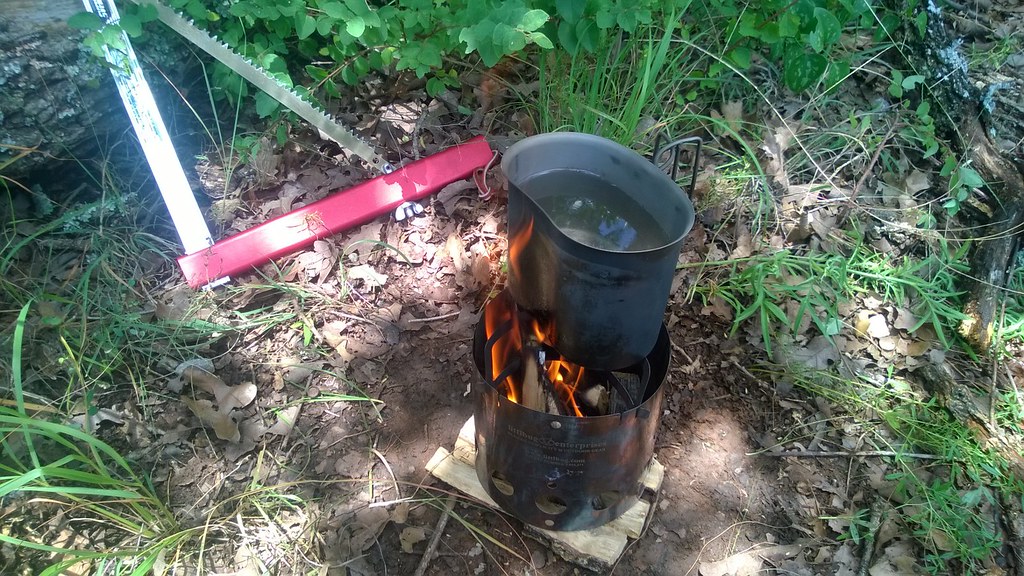 thanks for looking
Posted by OutdoorEnvy at 9:11 AM 6 comments: